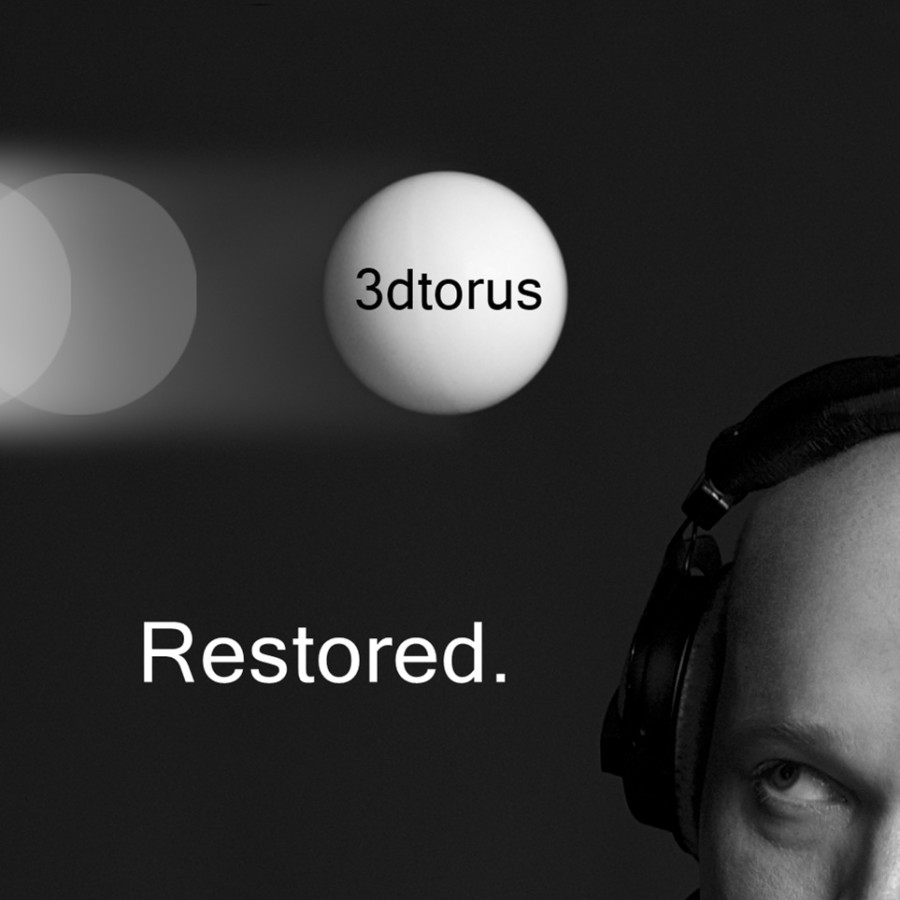 ‘3dtorus is a solo electro/techno artist from Berlin, Germany. His music has been swimming in and off of the Internet for over 2 decades. He is now coming to the light with new albums and collaborations. We had a moment to hear him discuss his latest move to techno/ambient textures.’

How are you today?

Martin: Thanks, very well, I did a long walk with my gf in the afternoon. one day with great light today.

It seems the greatness of 3dtorus is changing into another style of Electro. You’re now taking the journey into Techno?

Martin: hm, I have always loved techno, nonetheless I listen to a lot of different music which all finds its way into my own music. Apparently now it´s time for techno again.

What brought you to change, was it an idea or was it simply time to more this direction?

Martin: Not necessarily an idea with a certain point in time, more a change within the process.
The thing is, I have always used e.g. 4/4 kicks, but techno is more than that, it contains a certain soundset, an approach and in first place reduction.

Right, like the break-down, something that has been put away with modern EDM.
I personally welcome this change of yours, as the world of electronic should come back to it’s roots.

Martin: Thanks a lot, and actually techno, besides drum n bass and dub/reggae is where I´m coming from. That is where modern electronic music had its first impact on me in the 90s.

I understand you have moved from Ableton Live to Bigwig studio. Has this change allowed growth musically and artistically?

Martin: Yes, definitely. I was able to throw off a lot of patterns I had become used to, and that of course refreshes the music and also the creation process.

And this allows for more free-flowing ideas?

Martin: Hm, I had to develop a new way of handling my tools and this subsequently restructured my thought patterns which then lead to a fuel-up in creativity. The flow in Bitwig appears to me a bit more intuitive than even in Ableton. besides, it´s pretty hard to get it crashing. So, concluding – definitely a matter of growth.

The new work is fantastic through usage of a different medium for you, such as Bitwig, so bravo.

Martin: Thanks a lot.

I’m listening to your latest album, en-garde a post-techno base “Monotonous Miscellany.” How has this new change been received?

Martin: Yes, I´m really happy with that one. Statistically I´m not sure yet, I had some good comments, nonetheless, I only evaluate the first weekend when I release something new on the following Monday. The first weekend is my statistic time-frame.

You’ve spoken of this secret project you intend to let the world know about, but could you explain the story behind it?

Martin: You´re talking about the DREIFALT series – this is a series of ten singles with a strictly conceptual and methodological approach. It is also techno, deep, raw, dubby and minimalistic and up to par excellence.

Best of both worlds, 3dtorus’ sound and his new alter-ego, great to hear that.

Martin: Thank you, yes, I wanted to work in a space without expectations which have developed with the releases I had in 2014. so I just took the loop-hole.

Becoming someone else helps us sound different.

Martin: Yes, definitely. I would even say, it changes perspective completely. Of course I´m still myself inside, but the surface texture and structure have changed.

Back to your latest techno work, which I bought I might add. The next to the last song IV really hits home with me. I hear the deep bass, hitting the cranium, unlike clubs in the early 90s. Is this melodic sound the future of 3dtorus and his alter-egos?

Martin: Yes, i think I will follow this road for quite some time now. Ive always felt comfortable in repetition and also in a raw sound, and that´s where the journey goes. I´m also very much fascinated by the idea of a given frame and variations inside this frame.

Taking us back to early electro. I could certainly hear this being accepted by a live audience, and enjoyed immensely. You once told me in our voice interview for We are the New Underground that Berlin does not have a scene these days?

Martin: Yes – I think it´s a general change in electronic music, which is knocking at the door, the times of the polished and overly compressed anabolic sound are history. That will die. What stays is the deep, rocking, dirty and reduced stuff, at least in techno.

So you believe the over compressed ‘mushroom’ drum sound we hear today is getting old fast, namely mainstream EDM?

Martin: Yes. I go further, I ask: has it ever been relevant to anyone who has experienced the early days of techno?

I can’t say that I don’t agree with you wholeheartedly.
But your music is moving past that, completely by-passing it. Do you think the world of these modern ravers need some educating into the history of Electronic music?

Martin: I can´t say if they need this kind of education. What i can say is, that I’ve seen and heard something else first, and I think it´s the first impressions that are forming us. Actually, more important is to offer a different sound so people can choose again. Otherwise it becomes boring and too uniform.

Do you think modern electronic music is stuck and needs to continue moving ahead?

Martin: No, it´s richer than ever. In a certain way there are a lot of people out there who are pioneering again in various styles of electronica. Most important for a listener, imho, is to have choices and pick whatever they like, and only hereby comes a way of self education, you start searching, find something, search further, find another trace in the maze, and suddenly you discover things you would have never dreamed of. And these pearls are usually from the early stuff. Are we at at dead-end or stuck? Not at all… What needs to change to survive though. is billboard stuff…

I do agree. What does DREIFALT mean?

Martin: Dreifalt is trinity in english, but also tri-fold. It has to do with my other names, 3dtorus and Kanal Drei, you’ll find those 3 everywhere – and also with the fact that I´m finding the usage of trinity a concept which unites most spiritual approaches on earth and I like this idea of common sense despite all differences.

These three make the sound of 3dtorus?

Martin: Until now, yes. But I won´t exclude future explorations and other projects, I like this idea of creating new artistic identities. I would put it like this: 3dtorus is what I am, the rest is more something that I do. Besides that, DREIFALT is finished – nothing will be added, a closed story about an artistic process and musical methodology.

Now I understand. Any new projects, how about some videos?

Martin: Oh, yes, the video issue. I have plans for that, but more in the form of collaborating with video artists – i do not want to do everything myself, in this case simply because others do it better.

What surprises would we find in a 3dtorus video?

Martin: Plain colors, simple repetition, abstract language of shapes and forms, like classic techno and electro videos, e.g. the Plastikman videos from the 90s. i can well imagine to work with VJs for such a project.

Martin: No, but I would love to, but now it would take me some time first to setup Bitwig and get full control of it. But actually I´ve just ordered a Behringer 10 channel mixer for such purposes. it´s my birthday soon, so I took the opportunity.

Do you create music through keyboard such as, playing via midi controller?

Martin: when i´m composing it´s actually a mixture of tools – i use a small akai mpk mini with 25 keys to try out harmonies and melodies, furthermore I mostly build drum & percussion patterns without hearing them. I build them guided by visual structure. To go from pattern to arrangement, I mostly do live takes of triggered clips. and after that modifications and manipulations are recorded in overdubs. I started to reduce mousing at a point in the past, nonetheless, if comes to detail, of course i edit with the mouse, or in my case, trackball.

And you create the drums via fingers to the keyboard?

Martin: No, in the sequencer. That´s one point where mouse is also necessary. I mostly build patterns between 16 and 64 bars. I do not like the human factor in drums, to be honest. I rather strive to make the machine sing and swing.

What is the world of 3dtorus’ music like to the first time listener?